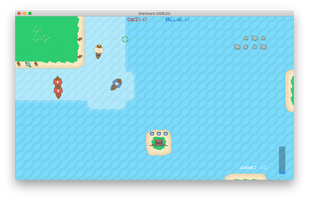 I worked quite a bit on the enemy sailing system yesterday, and last night, and this morning, ugh, and it's quite difficult to code what I want, and when I do, it turns out that what I want isn't what I need. Anyways, continuing to work on bot sailing is certainly on my checklist for today. But before I completely burn out on the problem, what else can I work on?

Wow, that's a lot! And I'm certain each point could be expanded to include several more. Seeing this long list will help steer my focus toward other tasks when I've spent too much time diving deep on a particular task.

I'm going to start this day with a spike on networking code because it's the biggest unknown to me and I'm excited about trying out Godot's implementation.